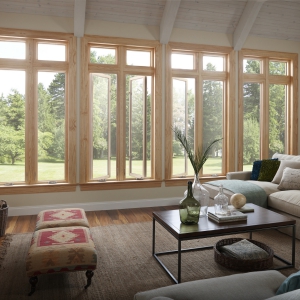 Whether you live in an historic home and are seeking to replicate the architectural style of an earlier era, or you wish to convey a contemporary look to refresh the look of your home, you’ll find a type and style of residential window to suit your design and budget.

A wide range of residential window types are available today

Residential window styles often used in homes today include double-hung, single-hung, slider, fixed, or casement windows, sometimes called crank out windows because the hardware literally cranks out a window sash to open it.

Slider or sliding windows feature a sash that opens and closes by moving horizontally, from side-to-side to open and close.

Other types of residential windows include awning windows in which the sash lifts up and out like an awning. Hopper windows are those that tilt in, like the type of windows sometimes used in basement applications, or in window groupings.

Tilt and turn windows feature moveable sashes that literally tilt and turn to open. This design is popular in Europe and is also available in the United States today.

Clerestory windows are those often placed out-of-reach of the occupants in a home, but which invite in natural light while adding design interest. These windows may be in the upper level or a two-story room, or near the ceiling of a room.

Garden windows project outside a home’s walls and often include shelves in which plants can be set to soak up the sunlight.

Radius or circlehead windows are those that are curved in shape, like that of a half-circle.

Eyebrow or arch-topped windows are those whose curved topline shape resembles that of an eyebrow or an arch.

Transom windows may open to let in fresh air or be permanently fixed in place. They are typically installed above other windows or doors, to give the illusion of larger windows, or to create the look of a window wall. Transom windows are also sometimes installed over doors, as in older homes with taller ceiling heights to allow for air flow from room to room.

Bow or bay windows extend at angles outside of a home’s walls to add architectural interest. The difference between a bay and a bow window is the degree of angles. Bay windows often include greater angles and typically range from two to three or four windows. Bow windows curve more gracefully at smaller degree angles and feature more windows. Bay or bow windows may also include a window seat or space to display your favorite items inside the home.

Patio doors are often included with residential windows to provide a uniform look and functional access to outdoor living areas.